An interesting way of explaining this crossed my Facebook timeline today: 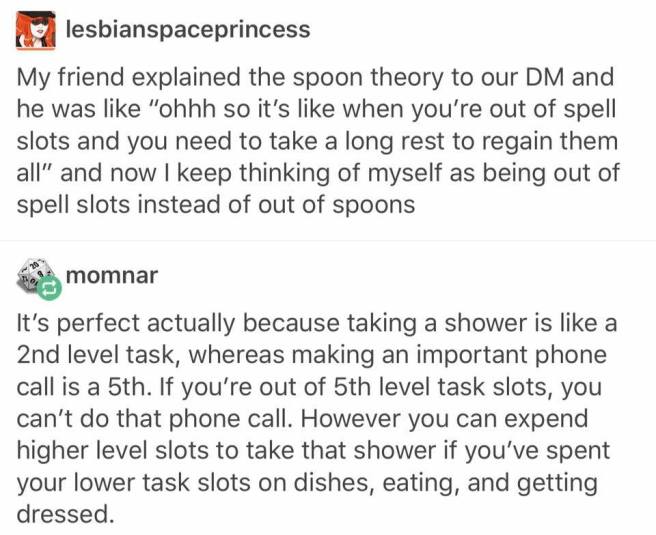 Spoon Theory is very useful for a lot of people, as it is a quick way to explain illness.

It is a simple concept:

You have a cup full of spoons. There are different types, from one-use plastic spoons, specialised ice cream spoons, to reusable, reliable metal spoons. These spoons can be used for different tasks, depending on how much effort they require, and need to be recharged after being used.

For example, as stated above, taking a shower can be a lot easier than making a phone call, but there are days when the simple tasks need a lot of effort too. It’s all about knowing your limits, and not pushing yourself beyond them.

So who does this help? People with mental illnesses, such as depression, social disorders like anxiety, physical disabilities such as fibromyalgia, to name a few examples I know of.

What spoons are not for: people feeling a bit tired and deciding they can’t be bothered, having a headache and not wanting to take part, or really anything that doesn’t interfere in the everyday running of a life.

Not trying to be mean, but if people use spoon theory when it doesn’t apply to them, it dilutes the effectiveness for those who really need it, and muddies the water as to what it means.

Here’s a piece by Christina Miserandino that explains further: The Spoon Theory.